Home | March 2018 Wrap Up
This post may contain affiliate links, which means I may earn a small commission when you make a purchase through these links. Read the disclosure policy for details. 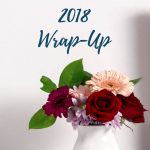 Inside: Find out how goals progressed in March.

April and spring are both officially here, so that means it is time for the March wrap up. 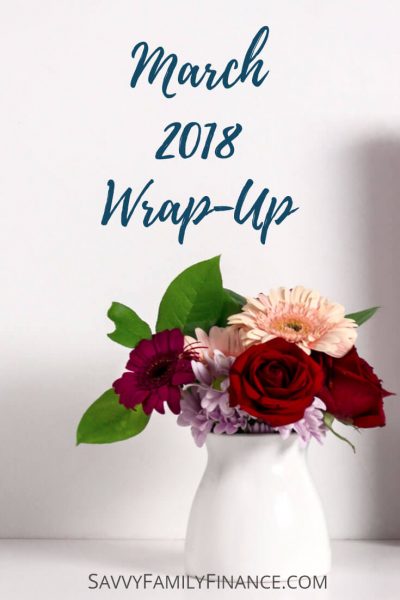 We had a lazy spring break and didn’t go anywhere other than a day trip to the coast. While there, we did some whale watching as it is migration season. My daughter claims she saw a tail through the scope and I was uncertain if I was seeing a whale or two or just some large swells. Either way, it was a nice drive and we spent some time on the beach as well.

How did I do with goals this past month?

This year my primary health goal is to lose weight, or rather, lose inches. I honestly prefer watching my measurements rather than numbers on a scale. Yes, progress will likely be slower at times, but it also seems healthier (in my mind) to care more about how clothes fit and improved posture versus some number on the scale.

Of course, losing inches will translate to losing pounds, given the goal I’ve set.

So, how has it been going?

I’ve been working out consistently, now meeting my minutes goal for the week and exceeding the calorie goal. However, about ⅔ of the way through the month, I still hadn’t lost any more weight. Talk about frustrating.

So, I logged into my long stagnant myfitnesspal account, changed the password, and started counting calories. To be blunt, it sucks. And yes, it is as tedious as counting pennies in a budget.

But you know what? In both cases, counting works. It shows you where you are veering off track and allows you to figure out how to make course corrections.

For March, I haven’t lost any weight. But, the calorie counting is in full swing.

Not losing weight is frustrating BUT I did manage to lose a ½ inch from my waist. Besides that, thanks to back exercises, my posture is much improved. This is thanks primarily to various rowing exercises (barbell row, dumbbell row, inverted row). It really seems to counteract the computer hunch.

Overall progress in March? I’ll give myself a B- again. I’ve gotten more consistent with the workouts, am reining in the calories, but have yet to lose any real weight.

Last month we wrapped up rebalancing our portfolio.

It is no secret that the market this year has been a bit bumpy. How has it been for us?

Our portfolio held its own last month compared with the S&P 500.

The market was down again, but it wasn’t horrible by any means.

Our net worth did take another hit in March. The eagle-eyed among you may wonder why I did a screenshot from March 2 rather than March 1.

That is because on March 2 I added my husband’s 401(k) account to Personal Capital so by including March 1 it looks like there is a humongous jump. By starting the graph with the account added in, it is a more realistic picture.

ORGANIZE AND DECLUTTER THE HOUSE

In March I attempted to tackle the mound of paperwork in the home office.

Well, let’s say there is still a ways to go and it continues to be a goal for April. I am only working on the paperwork in the office because the rest of the office clutter belongs to my husband and I am not touching that. Books, servers, drawers of cables and connectors… Yeah, he can tackle that.

Taxes did get done and filed. I also did scan a 12” pile of paperwork. Did you know a roughly 12” pile of paper shreds up into many times that volume? The shredded paper filled almost 10 grocery bags.

Last month I decided to try and read two books each month for fun. Too many years had gone by without me picking up a book.

March was slow on the book front, but I did read two good books. The first was an author new to me. The library system suggests books similar to those you’ve read that you may like or what other people with similar reading histories like as well. In December, I decided to try a “new to me” author and it didn’t go well.

This month, I gave it another go and have found an author I’ll be reading more of. The book was A Deeper Darkness by J.T. Ellison. The other novel I read from an author known to me was Turtles All The Way Down by John Green.

This didn’t happen. On the contrary, we bought something listed on Facebook Marketplace.

For cardio, I like to use a rowing machine. As budget-friendly as it may be, running just isn’t going to happen and for some reason, rowing clicks with us.

So, I was browsing Facebook Marketplace and found an awesome deal on a barely used rower and was the one lucky enough to get it. While I could turn around and easily sell it for over twice the amount I paid, we are going to use it and use it a lot.

For some people, paying for a gym membership is what gets them motivated to get out and work out. For us, it’s more of “Ugh. You mean I have to shower, get dressed, drive to the gym, deal with people, workout, shower, get dressed and drive back?” Working out at home means changing from our pajamas to workout clothes, working out, then shower and dress.

Both my husband and I really like using the rower. If you are actually using the fitness equipment you buy, why not get it? It is still cheaper overall than a gym membership if it gets used.

Progress was slow in March. Our net worth for the month was down thanks to market volatility, weight wasn’t lost. Actually, on paper, it seems like March kinda sucked. We aren’t stressed about it, though.

The days are getting sunnier and warmer, trees are in bloom, and the allergy meds are stocked.

How was your March?

It is easy to keep track of your investments and net worth with a free account at Personal Capital.

We use cookies to ensure that we give you the best experience on our website. If you continue to use this site we will assume that you are happy with it.OKRead more