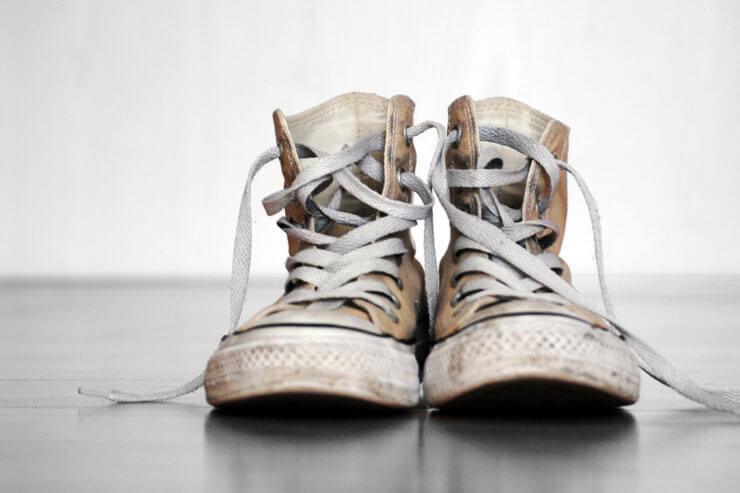 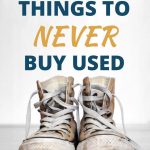 Inside: Sometimes it is best to buy new rather than used. Find out what you should never buy secondhand.

Buying secondhand is a great way to save money. It makes sense to buy used weights, solid furniture, clothes, and bikes. It is the reuse component of reduce, reuse, recycle. And who doesn’t like to save money in the process?

11 Items You Should Never Buy Used

Saving money is never a bad thing. Until it is. There are some items, due to safety issues, financial risk, or the ick factor, that you should never buy used.

Laptops can be expensive, so wanting to save money here by buying used might seem reasonable. But, don’t do it. Computers are prone to viruses, malware, and hardware failure.

Laptops are one of the few items where I would actually recommend getting an extended warranty because due to their portability, they are more prone to hardware failure and other damage. The last thing you want to do is buy a computer with spyware installed and a hard drive about to fail. That would be wasted money. Instead, spring for a new laptop and choose your features wisely.

You don’t want to skimp on your children’s safety and getting a used car seat is a risky proposition. The plastic in the seats degrades with time, so there are actually expiration dates stamped onto the seats.

Also, if the seat has been part of a car accident, its structure could be weakened even if there is no visible damage. Car seats are an item you want to never buy used.

If you can, avoid buying used shoes. The footbed likely molded to the previous owner’s foot and that could cause you discomfort and pain. You also run the risk of fungus and other things breeding in the shoe. And, yes, shoes do break down with age as well. I dragged out an old pair of heels of mine once and the soles promptly split after I tried wearing them.

Ok, I will fess up and admit I did this once as a poor college student. (sigh, the follies of youth)
And yes, I regretted it thanks to the cigarette odor that it came with it. After several days airing, at least I put a cover over the mattress.

Besides inheriting various odors, buying a used mattress could also come with other unwelcome surprises such as various bodily fluids, bed bugs, and an uncomfortable sag. That and most mattresses are good for only about 10 years. Save yourself the grief and buy a nice clean, new mattress. I wish I had.

Helmets are safety gear and thus an item you do not want to buy used. The plastic and foam degrade over time and won’t offer the protection needed if you are in an accident while wearing an old helmet. The performance will be compromised with a helmet that has been in an accident.

Safety standards on cribs have changed a lot over the years. Drop-side cribs are no longer sold because of safety concerns. And, let’s face it, kids are really tough on their cribs. I’ve seen many tots jump in, climb on, kick, and shake the crib. All of those will compromise the joints.

Buy a new crib with a snug fitting mattress to keep your baby safe. Check current recall lists and subscribe to CPSC recalls to keep abreast of newly issued alerts.

Vacuum cleaners are hard-working appliances that will eventually fail. You can buy one that is both inexpensive and works well. The potential repair bill makes this something to never buy used.

A good, solid cookware set can be used for a very long time. However, the coating on non-stick cookware will eventually get scratched and flake off and it often only takes a couple years to do so. The chemicals from the compromised coating can then leach into your food.

Save yourself some grief and buy new, inexpensive but well-rated select non-stick pieces.

If a friend has a newer, unused bit of makeup, that is likely fine to buy. But most used makeup is probably old (not good for your skin) and has who-knows-what bacteria growing in there. Just don’t do it.

Used underwear? Just, no. And the fabric in swimwear has a short lifespan so will lose its stretch. If it touches your body that intimately, buy new.

Most software these days comes with registration codes that offer one-time use or, once used, are associated with the hardware it was installed on. If you buy used, you are likely wasting your money.

Saving money is a good thing, and often buying used items is a great way to shop. But sometimes buying secondhand brings risks that negate any savings.

What items do you never buy used?

10 Simple Ways to Save Money at Restaurants
Next Post: 15 Amazing Benefits of Amazon Prime You May Not Know About